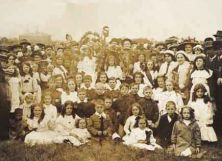 Jean was a regular player and captain of the Ladies team for several seasons. She attended the clubs 90th Anniversary celebrations in 2013. Her late husband, Doug, was also a prominent member of the club, captain the mens team as well as being match secretary.

Jeans son Paul also played for the club, and her daughter Ruth's husband, John Hunter, played in the same team as present club stalwarts Stewart Wright and Ray Warrick. Also in that team was former BBC Sports commentator and Olympian Stuart Storey. John also played at International level for Scotland, and is a cousin to Pete and Nick Worth.

A thanksgiving service will be announced at a later date.