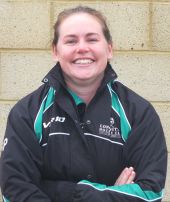 New year, new pitch and the ladies' 1st team had been allocated prime spot. The long-awaited day had arrived, and our feet trod on the new turf with great expectation. Could this be the fortress it once was? Only one way to find out. With a full squad and a new player in Charlotte Walsh, confidence was high. From the whistle blow, Sutton showed they meant business, driving at the opposition with pace. The game was played in the BDHC half for much of the opening minutes and this resulted in Gemma Parr surging through the middle of the pitch and into the D. She was unlucky that her shot didn't hit the back of the net. Sutton proceeded to force 3 short corners in quick succession but again, the crowd were denied the perfect opening. Bourne Deeping were not going to lie down and did get the ball in our D but Lorraine Wallis saved easily. Jess Burton was having one of her best games overlapping the midfield to create openings up the right-hand side of the pitch. Sutton were using their skill and pace to good effect. However, against the flow of play, Bourne Deeping had the last laugh of the half as they converted a short corner by passing to the far post and slotting home past Wallis who, along with Tania White on the post, had little chance of stopping such a well-executed routine.

Half time and key messages delivered by Josh Baker and captain, Jo Bland resulted in Sutton coming out fighting for the second 35.

Sutton again started strongly but were indebted to Lorraine for an outstanding double save to keep the ladies in the game. MOM Gemma Parr was controlling the game as only she can, breaking up numerous threats and distributing every time to give us an opportunity to attack. One such occasion found Connie Gittins who slipped the ball into space behind the defender for Jo Bland to race on to. She drove into the D and found the keeper bang in front. Her initial shot rebounded kindly and she lifted the ball over the prostrate keeper into the empty net. The goal gave the crowd something to cheer about and the team a boost. Winning the game was all that was on anyone's minds and another defense splitting ball found Katie Collingwood-Smith bearing down on goal. She calmly took the ball round the advancing keeper before smashing home for the lead.

Inevitably, Bourne Deeping threw everything at Sutton but we held firm and were resolute in defense with everyone playing outstandingly well to deny an equalizer. Sutton ran the clock down and saw out the remaining time to start off the second half of the season unbeaten and upbeat. Thanks must go to all the supporters who were vociferous for every minute of the game. Also to the umpires who kept the game flowing and the team for making sure that the turkey and sweets were kept to a manageable level in the festive break.