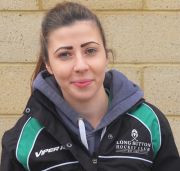 Long Sutton Ladies welcomed Spalding ladies to the Peele Leisure Centre on a wet dreary Saturday Morning. However, Sutton ladies were not in the same mood as the weather! Spalding started strongly but found a resolute defence of Julie Skate, Lucy Smith, Jayme Hunt and Claire Smith, who were mopping up everything thrown at them, ensuring that nothing got through to reserve keeper Wallis.

With a midfield of George Synott, Lotti Dack, Charlee Leuty, Emma (Staffie) Grosvenor and Wendy Canham, covering every inch of the astro, Sutton began to build attacks of their own looking for the forward running of Imogen (Greyhound) Cooper. With a squad of 13, to include Esme Whitelam and Lynne (sausage) Braginton, Sutton were able to keep rotating to ensure that energy remained high and they continued to frustrate Spalding. The half finished 0-0.

Skipper Emily (Schnauzer) Braginton delivered a snappy half-time team talk and they were ready to go again. Spalding continued to throw everything at Sutton, but when they did beat reserve keeper Wallis on one occasion, they found Jayme (Red Setter) Hunt in no mood to allow a goal, even if it meant using her feet. A penalty flick awarded! Experience however overcame youth and Sutton survived. Sutton gained in confidence and could have taken the lead, when Lynne Braginton found herself one on one with the keeper but she was not able to convert. With time running out Spalding were awarded a number of short corners which were defended as a pack of Wolves would defend their young and Sutton were delighted to have held out for a well-deserved draw. Spalding certainly left knowing that they had been in a dog fight.

Player of the match went to Charlee (terrier) Leuty for her tenacity in the tackle, her bark definitely not worse than her bite! A great result ladies and well deserved.