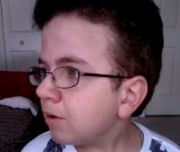 Sutton travelled to Dereham with a slightly depleted squad after one regular had to withdraw due to a prior commitment to be a Dog Whisperer and another pulled out as he was expecting to have a busy Valentines Day; no such worries for Ed White though as he stepped up to the plate and joined the 12 man travelling squad after taking a Planes, Trains and Automobiles journey back to the Shire with his accompanying Hobbit. Dereham started strong however the revised back four of Fox, Baguley, White and Oldfield held firm with able support from the ever improving Brad Whitmore in the goal. The team battled well and worked hard even though their normal midfield dynamo Batten reclined on the bench resting his niggling hamstrings. Chances fell for both sides, with Josh Baker particularly annoying Dereham with his mazy runs; however it was Dereham who scored first from a finely placed short corner which eluded Fox on the line – the only blemish on an excellent performance from the skipper who was voted Man of the Match in a poll where he counted the votes. As always Sutton fought back and during a series of short corners Baker managed to despatch a drag flick finish to level the scores. With the strong winds wreaking havoc with passes it was always likely that goals were going to come from set pieces and this was the case in an enjoyable, strongly contested game. Half time 1-1. The second half started with Sutton under a little pressure and struggling to get the ball out of their own half but the introduction of Batten allowed the game to be stretched a little and whilst it was Dereham who took the lead again from another short corner it was soon Sutton who were pressing forward and having the lions share of the game. Markillie nullified the threat from the Dereham playmaker in midfield and this allowed Sutton to drive forward and earn another series of short corners; one of which resulted in another Baker drag flick finish to level the scores. Sutton pushed on and after goal line technology denied Jacob Synott the winner and Baker, Canham and Batten all had half chances for a winner the game ended 2-2. It is a testament to the progress of the side that it felt like two points dropped rather than one gained; February is very different to September!