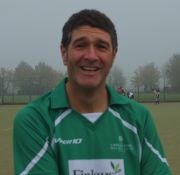 This week the 3s went away to Peterborough with 13 players this week, we started off strong with our midfield and wingers getting into great positions for the ball to be given to them. We had a few plays moving forward but were not able to convert anything. From Peterborough's first attacks our defence were strong in tackles and not letting the ball get through us, but from one good pass Peterborough they were able to split our defence and get a goal. They had a few more attacks but Jacob Loweth in goal was stopping them all. Sutton got off on a breakaway with the help from George Neale and Mackenzie East working together in the middle and the wing to move up the pitch. The ball was played through to Jon Goodley inside the D and he got a shot away and made the score 1-1 near the end of the first half Peterborough got a shot away and ended the half 2-1 up. Soon into the start of the second half Jon Goodley found himself on the left side of the D with the ball and smashes one right past the keeper into the side netting making the score 2-2. Only a few minutes after this the ball was played to Steve Smith at the top of the D and he slaps the ball right in the bottom corner taking Sutton into a lead of 3-2. Peterborough got a short corner and had a great shot and scored but the goal was disallowed by the umpire, from this Sutton took a quick 16 and passed the ball to Adam Pack just past our own 25 yard line and he makes a great run towards the left wing and gets around one player and gets to the corner and cuts in driving at the D, passing one more player and slotting the ball for a goal in the smallest angel past the keeper marking the score 4-2. With 10 minutes left we had a short corner, Jon Goodley injected the ball to Jack Smith who stopped it for McKenzie East to drag flick, the keeper did a great save but the ball went right to Goodley who was waiting to smash one more in to give him a hat-trick. With only a few minutes left Sutton played the ball around to each other trying to make one last break for goal but it was full time. Sutton won 5-2 and man of the match was awarded to Jon Goodley